Read how to join this choose your own adventure story here.

Like what you see? Leave me a tip on Ko-Fi!

“What the hell you’d want to talk to him for?” Booker asked Jack skeptically, pulling Ryan to his feet. Booker’s contempt was for Andrew rather than his son, of course, a fact that Sullivan clearly knew well from his open indifference.

Better than open hostility, at least.

Elizabeth stood beside Diane, who had ushered the girls off to look after patients, and now all they could do was wait. That was likely easier for Elizabeth than the others, since she at least knew what Jack wanted to discuss.

“It’s important, Booker. Trust me,” Jack added, going for Booker’s weakness. He let go of Ryan with a warning look and standing close to Rapture’s founder just in case. It was a start.

“You’ve already figured out that these people saved me from Fontaine,” Jack said, gaze set on Ryan. “But there’s more to this than you could find out on your own. Than any of us alone could.”

Elizabeth caught Tenenbaum smiling and couldn’t resist a smirk herself. Who knew she’d start in the sky and find her place at the bottom of the sea? (And a boyfriend– nothing could dampen that recent development.)

“I need you to trust them like I do, because they’ve always looked out for me.”

Ryan scowled, holding out his cuffs to Sullivan, who fished out the keys to free Ryan. “Son, they hid you from me.”

“Because they didn’t know what you’d do.” Jack let the implication hang, and it worked: Ryan let his argument die. “And now that they do, they’ll have to learn to trust you too.”

Tenenbaum scoffed. Crossing her arms, Diane muttered loud enough for Ryan to hear, “You said it.”

“Please listen,” Jack implored, less tactical and more emotional when talking to them directly instead of Andrew Ryan. “This plan means everyone has to work together. Right now, Rapture is divided between Ryan, the Rapture Family, and Atlas.”

Gesturing to the inner clinic beyond him, Jack continued, “We’ve helped the Family and you here, Ryan. Together, we have a chance to unite the Family, or at least some of them, with you against Atlas. We can take back Rapture and restore it as a better place. For everyone.”

“Hold it,” Sullivan stepped in. He didn’t agree with Ryan, Elizabeth knew as much from Booker, but he must still be caught off guard. “We just find out he’s your son, and he’s making decisions now?”

“He is, and he will be part of my decisions,” Ryan answered curtly, “Though he should know that peace with those cultists is–”

“They’re not all cultists.” The hushed surprise at someone daring to talk over Ryan was heavy in the room. “People took shelter with the Family after they’d been driven from their homes by poverty and war. There’s no city without people, Ryan. And this is our only chance to save it all.”

What do you want to do, Elizabeth / Tenenbaum? 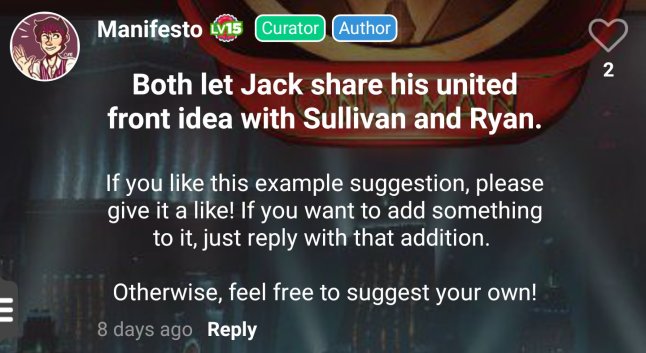 One thought on “BioQuest: Truce”