Read how to join this choose your own adventure story here.

To see more content like this regularly, please support me on Patreon or leave me a tip on Ko-Fi.

The lighting had fully dimmed in Arcadia, which was fortunate. Booker and Tenenbaum stood in shadow by the tunnels to the smuggler’s hideout, but they were quickly running low on time for Jack.

Tenenbaum snapped at Booker, harsh and breathy as she kept to a whisper. “I have no reason to take your word–”

“And I’ve got a few reasons to doubt yours, but this is about the kid,” he reminded her, his voice quiet like her own. It did not matter, Tenenbaum felt the heat burning in her throat, a raw anger at his response. Between the two of them, did he not think she knew more about this boy than he ever could?

“We have lost too much time already,” she dismissed, barely turning towards the tunnel before he grabbed her shoulder and turned her to face him. 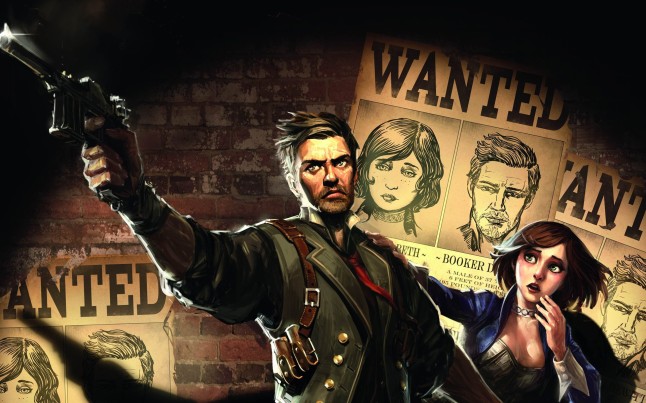 He loomed over her, broad and sharply dressed even in shadow. Tenenbaum could see his gun at his side, and the close military shave. In this dark corner of the park, he nearly looked like…

“We head back now, and we can make it!” She shrugged his hand off, and he took that hint. Thankfully he didn’t have Fontaine’s accent or she may have shot him. But it was enough…

“You can’t even tell me why that is!” She went to Fontaine and his men with her ideas and a slug, and Tenenbaum knew from the moment they met he could soon be running Rapture… “I am no one’s servant.”

But she did not realize how much control he would have over her. She shook her head, stepping back and ducking into the tunnel. Her footsteps echoed off the close walls along with a distant dripping.

“Dammit, will you just listen to me?” Sliding her hands along the rough walls, she pressed on as her eyes adjusted slowly to the darkness. The floors were mostly even and her heels didn’t slow her down any more than Booker’s voice behind her.

“Doctor? Doctor!” He muttered another curse, and he clambered in after her. The dank, still air came as a comfort. Without these passageways, they would lose Jack. She could not have rescued the girls.

Her heart beat against her rib cage like a prisoner in rebellion, but Tenenbaum found a touch of peace here. Fontaine had used these passageways too, but for a much darker purpose… She shook the thought away again.

Booker closed the space between them even though she hadn’t slowed down for him, and they walked together in silence. At last, a light reached her and she paused at the exit… A familiar enclave greeted her, but not the one she wanted. 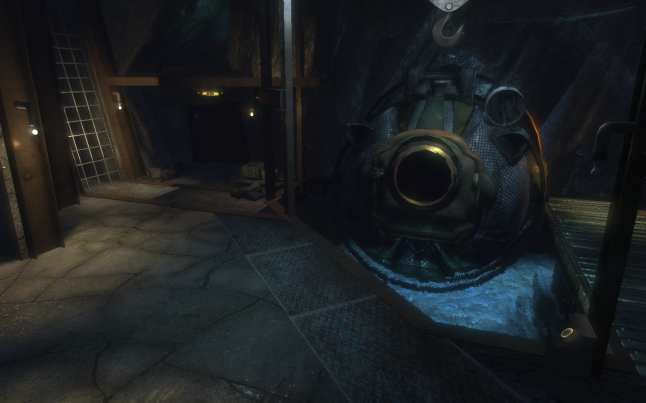 “Scheisse,” she whispered, putting her arm back to push Booker to retreat. The submarine was here, which meant Jack was still safe, but men would not be far… They needed to ambush them if they were to win.

“What’s it now, doctor?” Of course he could not see the men coming, and Booker continued. “We can still go back–”

“Hey, who’s there?!” Too late, he realized and pulled her back and fired, emptying his shotgun into the closest smuggler.

“It’s the damn Kraut, I,” the second man began, staggering back as he watched the blood pool around his fallen friend. “I gotta warn ’em!”

Taking aim, she lodged three shots in the man’s back as he ran. He fell into the ocean water, sinking below. A shame nothing he had would be usable by the time his corpse floated back. 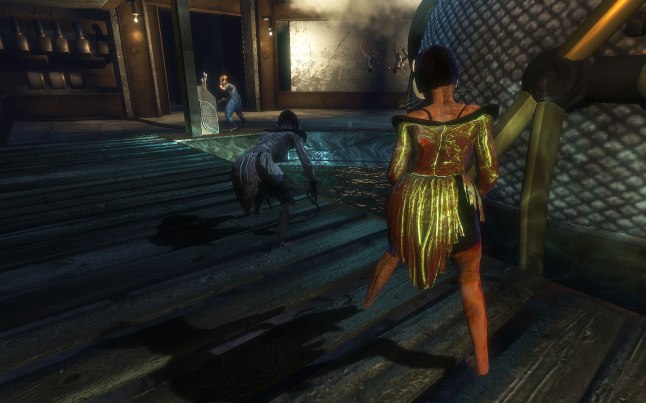 More footsteps came, heavy and close. No Big Daddy by any measure, but more men than they could fight in time. “Go,” she ordered, and Booker followed. Rather, he lead, inefficient in such a small space but fortunately picking the right branch of the tunnel she’d meant to choose.

“You will see boxes up ahead,” she warned him. “Don’t step out unless you do.” 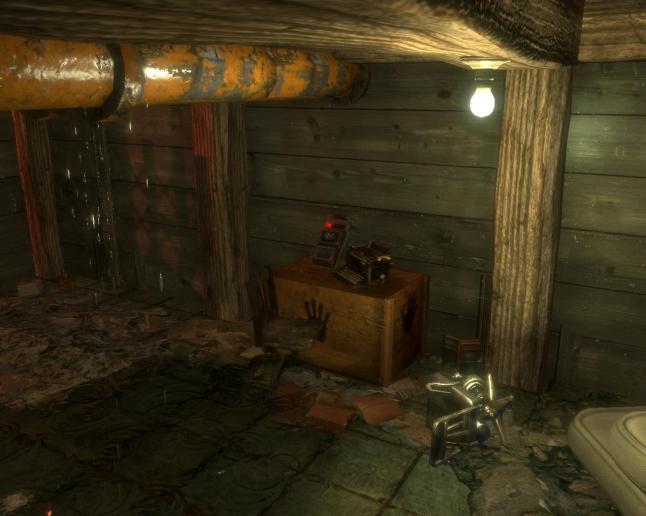 “I think you’re late on that,” he deadpanned and left the tunnel. Around him, boxes with the single handprint sat piled and waited for distribution. Anything to pull that Great Chain one link closer to Fontaine… “What was that about anyway? Those guys got a grudge against you?”

“Not them,” she said, winding through boxes to a cavernous hall that would lead from the hideout to a Bathysphere. This, this was what she wanted. “Fontaine.” And she stood low with her pistol drawn, burying the memories to deal with later. “Are you ready?” 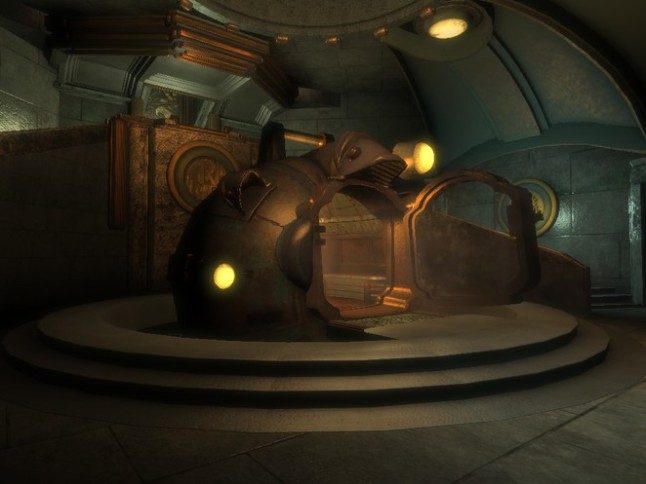 They reached the station without seeing a single other man. Perhaps her mistake had saved them after all, she thought, sinking into a seat on the Bathysphere. He watched her still, but something in his eyes… They’d changed. Booker held the stance and alertness of a solider as always. And yet there was almost an understanding in the way he looked at her… At least for now.

Water rushed past them and rails guided the Bathysphere to Port Neptune. Flashes of neon flooded the pod and vanished, off and on, off and on. Minutes or ages passed before he cleared his throat to speak.

“First time I did something like this, I was…” He stopped, hesitated, just as soon as he’d begun. “A friend of mine asked me,” he tried again, the Bathysphere closing in on Port Neptune. He stared out in the passing blur of ocean, his back to her, but his tone was one she could not mistake.

“If you take away all the parts of your old self, what’s left?” She’d heard this from herself: regret. Tenenbaum leaned forward and the seat creaking seemed to bring him back. He shifted his grip on the shotgun and faced her. “You can’t erase the kinds of things we’ve done.”

“Only decide what we do next. And right now,” he said, watching the Bathysphere dock into Port Neptune and standing in the cold light like a hero’s statue, “we’re gonna save that damn kid.”

The Bathysphere opened to the stench of fish flooding her senses and an uncanny silence. Booker walked ahead of her and this time, she followed him. He passed through the wharf as she caught up, his words marching through her head.

You can’t erase the kinds of things we’ve done. Only decide what we do next.

Light filtered through the glass above the wharf, meant to guide returning submarines. They were as close to stars as Rapture had, and they did guide them towards the fisheries where Fontaine’s men would be sending Jack away.

Ahead of her, Booker’s posture changed as he took cover behind a post along the boardwalk overlooking the dock of Fontaine’s Fisheries. Tenenbaum crouched behind another post with pistol ready.

She peered over and saw four men on watch; one by the entrance to the pier, one on the roof above the loading dock, and two to get the boy into the submarine.

What do you want to do, Tenenbaum?

Read the next chapter.

To see more content like this regularly, please support me on Patreon or leave me a tip on Ko-Fi.